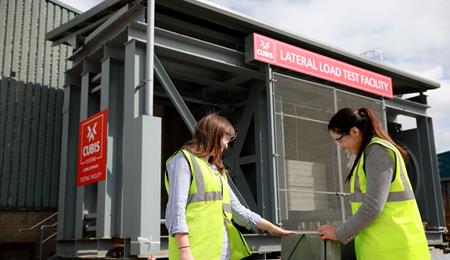 According to the Women’s Engineering Society, 64 per cent of engineering employers claim that a shortage of engineers in the UK is a threat to their businesses. The same organisation points out that, in the UK, only 9 per cent of the engineering workforce is female. As we approach International Women in Engineering Day 2017, on June 23, Nuala Maskey, Product Design Assistant at Cubis Systems, explains how businesses can help turn the situation around.

This summer I will come to the end of a placement year with Cubis Systems, before returning to Queens University Belfast (QUB) to complete my master's in engineering with the School of Mechanical and Aerospace Engineering.

I’ve learned a lot in my time with the company, but one of the biggest lessons I’ll take away is how important it is for businesses to partner with universities and engage with the next generation of engineers before they’ve finished their education.

QUB’s Engineering Leadership Programme, which is how I got my place with Cubis Systems, is definitely an example of this collaboration done right. Every year, ten companies sponsor the programme and each takes on a successful applicant for their placement year.

The process for students is quite rigorous, and those who don’t get a first in year one of their course cannot apply. However, it is completely worth it — even if being interviewed by representatives from all ten sponsors at once is completely terrifying!

It would be easy to view a placement as just another part of the course, but the last year has given me so much more than that. The start of my degree gave me a good, all-round grounding in engineering, but being able to contribute to real-world projects has been an amazing experience.

Rather than being treated as an intern, Cubis has really invested in my future and brought me in to work on large scale, international projects. For example, I’ve helped design underground cable troughs for both a European rail company and a leading nuclear energy plant. Taking my knowledge of systems like SolidWorks and working to solve the unique design, technical and practical challenges has been a great insight into life as a product design engineer.

Something else that Cubis has shown me is that, despite the low numbers of women actually taking up jobs in engineering, there is no barrier to women in terms of career progression. For instance, the Director of Technical and Product Development at Cubis is Dr Julia McDaid, and Aoife Quinn is the company’s Compliance and Polymers Manager.

My personal experience, up until working with Julia and Aoife, has been of a male dominated industry. My dad, uncle and a few of my cousins are all engineers, so I’ve always had an interest in the field, but I am the first woman in my family to pursue the career path. At university, my female class mates and I are also outnumbered by male students. But I see this to be down to the female perception of the industry, perhaps some are intimidated but I feel it is mostly due to a lack of knowledge as to what exactly engineering is and what a career in engineering would involve.

(Side note: I think this is everyone own opinion. Some people do feel intimidated going into a male dominated field, some are unsure as to what engineering is. Page 14 and 15 of the attached report gives reasons as to why people do not go into engineering/STEM jobs)

There’s not enough real-world knowledge that engineering fields, like product design, are highly skilled and technical positions with huge opportunity for progression and development. Product design engineers work in a wide variety of industries developing products such as, medical devices, cars, furniture, appliances and any gadget you can think of! Which is nothing like the stereotypical image of engineers, that was once maybe the case in the past. In a study carried out on pre-university students 75% expressed that having a career that helped others was important to them. People don’t easily recognise that engineers build hospitals and advance medical technology,  build roadways, trains and aeroplanes to allow us travel the world, or even that computers, laptops, tablets, smart phones are all designed and built in some way by engineers.

This is a perception that needs to be transformed, and this can be advocated by those already at work in the sector through the endorsing of engineering careers among young female students and educating them on the opportunities and applications of the profession.

The sub-campaign for International Women in Engineering Day 2017 is #MenAsAllies, so I had a chat with Dr Trevor Robinson, who coordinates the QUB Engineering Leadership Programme about both the importance of businesses supporting the education of engineers and how to get more women on board.

“We had a lot of feedback a few years ago that engineering graduates from QUB, while very technically knowledgeable, were lacking leadership attributes that were holding them back from promotion,” he said. “That’s why we developed the leadership programme. Getting businesses on board to give students practical job experience helps them to build up their knowledge as well as develop a level of maturity that stands them in good stead when they graduate.”

Speaking about women in engineering, Dr Robinson said, “We are starting to see a steady increase in the number of young women taking up courses in mechanical engineering fields at QUB. I think this has been greatly helped by several initiatives the University runs to engage more female students, such as the Athena SWAN initiative, which promotes gender equality in the sciences.”

I was the first student Cubis took on through the QUB Engineering Leadership Programme, and the next placement has already been awarded to another student who will be joining the company this summer. As well as helping her settle in before I return to my studies, I’ll be manning the Cubis booth at an event to encourage students to apply for next year’s placement.

It’s vital that more businesses and universities look at such schemes to answer the problems of skills shortages in engineering. Businesses are the ones that know what they are looking for in graduates; so surely it makes sense to get involved in the education process to produce the candidates the sector needs — whether they are female or not?

First established in 2005, the Athena SWAN (Scientific Women’s Academic Network) Charter delivered by Queens University is a scheme aimed at recognising and celebrating good employment practice for women working in Science, Engineering and Technology (SET) in higher education and research.

For more details on the award and how to get involved click here.