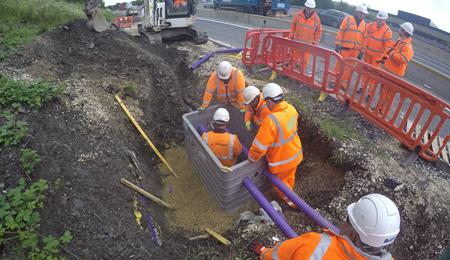 Europe's leading manufacturer of access chambers, Cubis Systems, has released a new infographic that looks at the history of Britain's roads. It explores as far back as 43AD, when the Romans began work on the national road network. Cubis Systems has looked at the history of our roadways as we plan a new age of the smart motorway.  The infographic can be downloaded HERE.

The past is truly prologue when it comes to the British road network, with various periods of great investment in change, such as during the industrial revolution. The infographic explores all of this, as well as how smaller inventions such as plates on vehicles and cats eye road reflectors have made a difference to our roadways. Looking at where we’re coming from is vital when considering the upgrade works that need to be carried out to take the country forward into the connected age of the smart city.

"It’s easy to get caught up in a new beginning and forget what has gone before, but this would take away from the great foundations that have already been laid," said John Griffiths, Highway Business Development Manager for Cubis Systems. "The move to smart highways will see investment in bringing technology to our roads, so it’s important to learn from the lessons of the past. Active traffic management techniques, such as variable speed limits, and the use of the hard shoulder at peak times will mean traffic flow will be smooth with less traffic collisions and more reliable journey times – but there is plenty of infrastructure work to be done first to facilitate these upgrades."

The seminal M42 scheme in 2006 saw a reduction in variability journey times of up to 27 per cent, and with a reduction in congestion inevitably comes a reduction in carbon emissions. The long standing goal of reducing carbon emissions means environmentally friendly electric vehicles may be prioritised with a designated lane on the highway and energy saving street lighting could be introduced. Ultimately, the future of Britain's roads looks bright.

Cubis Systems is one of Europe’s leading manufacturers and suppliers of access chamber systems, facilitating the development of highways, railways and telecoms. The company's use of the latest materials and technologies help developmental projects across the country to run smoothly.  For more information, call 02838 313100 or e-mail info@cubis-systems.com.